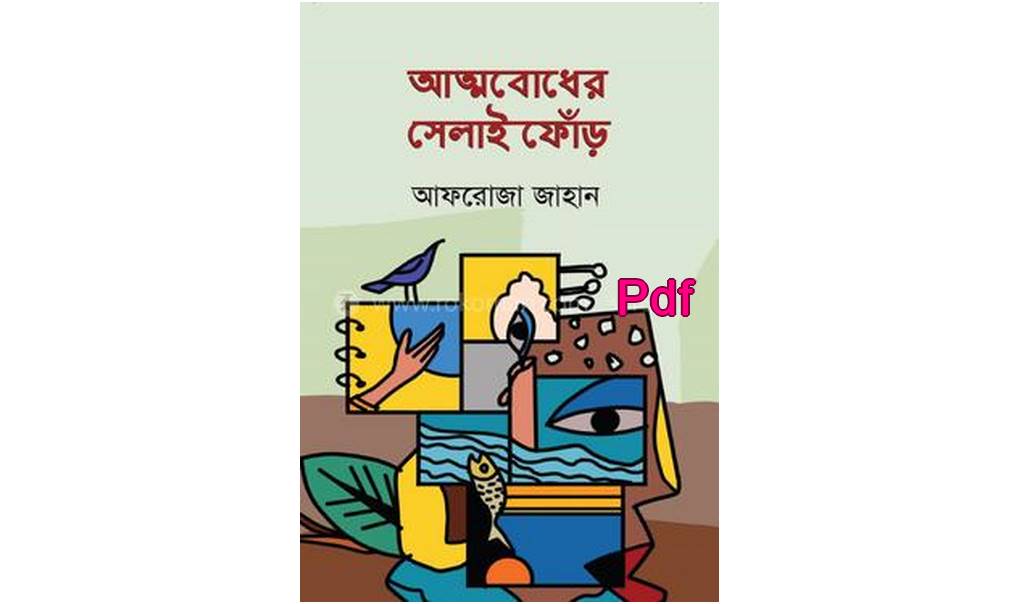 When a reader is reading a book, he or she is engaging in a conversation with the author. When communication between two people on both sides takes place through an alternative rather than directly, such communication can be called virtual communication. It can be said that a virtual communication is established between the author and the reader just by reading the book. What the author wants to say in writing is not always easy for the reader to grasp, unless a way is created to communicate directly with the author.
I have recently started taking such opportunities personally if possible. I got the results in hand. Afroza Jahan’s first solo prose book ‘Atmabodher Selaiphondar’ and her other writings once discussed her own mind. In that discussion, we get an indication of his awareness of the multifaceted nature of people and human life at the society-family-individual level. I thought she was a fearless writer. When I read ‘Self-awareness’, I consciously look for his thoughts in his writings. Needless to say, reader I am not disappointed.
A collection of ten short and long stories ‘Self-awareness seamstress’. Considering the subject, none of them can be called ‘small’. The storyteller has shown awareness in bringing the necessary variety to the same character in the same context in certain cases. I have seen some similarities and differences in these stories from generation to generation.
We can try to understand the story over and over again. For good reason, it is not possible to keep the table of contents in the discussion.
The restless wailing of a dead mother is embodied in the story of ‘broken ribs’. But nowhere in the story does Parama cry. He handles the pain with a sigh. Her husband Farooq is inactive in place of the original narrative. The sad part of the story lies in this inaction. We could have witnessed the ultimate mental imbalance if the story had gone a little further. That probably didn’t happen because of the storyteller’s strategy.
In the story of ‘Konaar Kalam’, however, I see that the strategy changes and the narrative part is shortened to quickly turn the beavers into amazing compassion. It is normal to mistake beef for human flesh when looking at the scene of a burnt human body. The place in the mental environment where Joynal commits suicide by setting himself on fire indicates the matter of Mental Trauma.
The story of ‘Death Sugar’ also shows a death. However, the strategy is a bit different. The work of symbolic ministry is evident here. In this story Krishnacura has come as a symbol. To put it more clearly, the red flower of Krishnacura. Gradually Krishnacura got reality in the blood color of Sajal. The story goes beyond the main story and shows the culture of the Tong shop-centric chat next to the university on a big canvas. The linguistic identity of this particular society has come up a bit. Whether it is industry, communication or any other institution-oriented profession, the life of everyone involved in the sudden collapse becomes miserable. This is echoed in Sajal’s death.
The story of ‘deception’ shows the picture of people’s mental condition. Here, the nature of ‘autophagia’ disease is shown in bold. And in doing so, the storyteller has created horror.

The story can be judged in a somewhat fatalistic sense. The pain that Sonalu’s mother suffers, the pain that Sonalu builds in herself. The cause of Sonalu’s mother’s suffering happens in the society every day. So is Sonalur, only the time and the situation are different, so the flow of the two sub-stories is different. In the end, ‘Dhoka’ has become a single story of a single genre.
The influential story of politics, crime and power in society is ‘unpublished truth’. There is a little bit of love in this story. In particular, there are some realistic details. In describing the corpse house, it is probably “this is what it looks like in stories, novels, movies.” – It would be better not to write this.
‘Yellow Warmth’ is a romantic-fantasy story. In this story, the attempt to show class struggle in terms of profession and language is clear. There are also indications of bridging the gap between class struggles.
The only story based on the liberation war is ‘Blood Wet Letter’. In this story, the nature of the oppression of the Khansena on the followers of different religions has come up, there are indications of the role of the Razakars. This story is basically a combination of letters and diaries. Towards the end, I got the impression of the storyteller’s alert vision in the context of the existence crisis of the heretics in the independent country.
“But in the last one month, our neighborhood has become haunted.” – Having a couple of such sentences in the story means that the story is undoubtedly heartwarming. In the same context, Shawkat Osman wrote in his novel ‘Farewell from Hell’ – “Bangladesh has been trampled by boots.”
‘Jayita’, ‘Roddur outside the circle’, ‘Rooted soul’ – all three stories have important aspects of family ties. The narrator identifies some sensitive aspects of the attitude towards women in patriarchal society. There is a picture of violence against women. Relevantly, there was an attempt to show the natural change of women in the world from generation to generation. Attitudes can vary from family to family. Afroza Jahan has shown courage in revealing all these truths in stories.
In particular, there is an opportunity to tell the story of ‘Jayita’ separately. In the depth of its narrative, it claims to be a novel. The story of ‘deception’ is also worth considering in this context. The story of ‘Jayita’ depicts the existential struggle of widows in bold. Husband and wife Nargis are the victims of the lust of everyone from landlords to office colleagues to liftmen. The extended insight of the storyteller, he can think specially about this story.
When I talked to him, he said – I write in simple language, it doesn’t become like reading (writing) with analogy. Many people nowadays write like that.
I was then